Libya and Tunisia, both of which have been the victims of a string of jihadist attacks over the last year, this week formally agreed to cooperate in the common fight against Islamist terrorism.

The internationally supported head of Libya’s new unity government, Fayez al-Serraj, agreed on the need to bolster bilateral cooperation against jihadists active in both countries.

This week jihadists from the Islamic State (IS) group advanced on the town of Abu Grein, to the east of Tripoli, overrunning a key crossroads during which a suicide bomber killed two policemen. That crossroads spills onto the coastal highway that stretches west towards the border with Tunisia.

“What happened yesterday in the Abu Grein area was very close,” al-Serraj was quoted as saying in Tripoli.

IS launched the assault from their stronghold in Sirte, which they captured in June 2015 and where they have set up training camps for Libyan and foreign militants, among whom are known to be a large number of Tunisians. An estimated 3000 Tunisians are believed to have joined IS in Syria and Iraq, while unverified figures suggest IS has up to 6000 fighters in Libya

The Libyan news agency LANA said Tunisia and Libya are expected to set up a joint committee tasked with controlling the main Ras Jedir border crossing between the two. In 2015, a number of deadly attacks claimed by IS killed scores of holidaymakers in Tunisia.

In March 2015 at the famous Bardo Museum in Tunis, 22 visitors to the museum were killed and 50 wounded, after which IS declared that “two knights from the Islamic State, heavily armed with automatic weapons and grenades, targeted the Bardo Museum”

Even the presence of children did not deter the IS gunmen 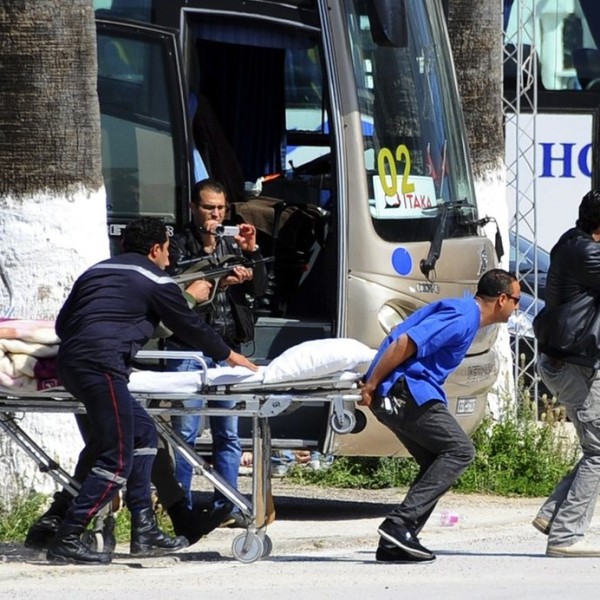 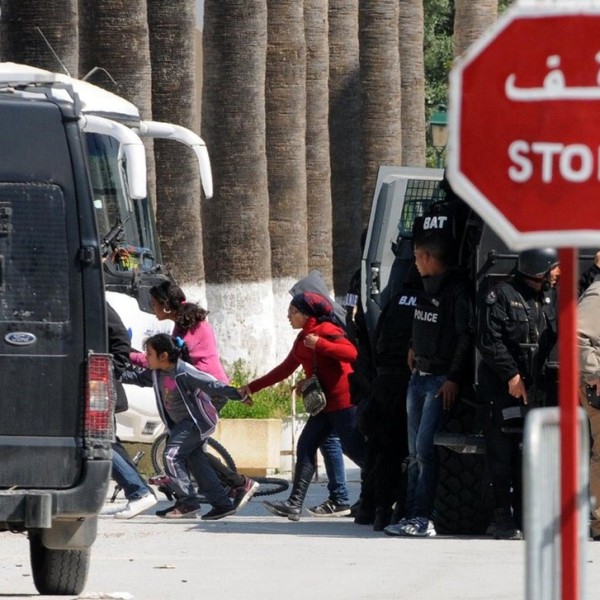 This was followed in June 2015 by a second attack, when 39 tourists and Tunisians were killed and a further 36 were wounded in an attack by a lone gunman at the beachfront Imperial Marhaba Hotel near Sousse, 150kms south of Tunis- below) dealing a devastating blow to Tunisia’s tourism industry.

Tunisian and Libyan officials agree that the attacks were planned in Libya. 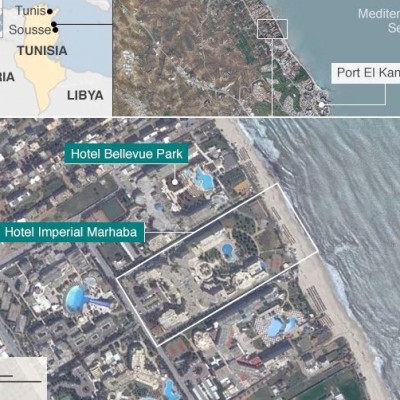 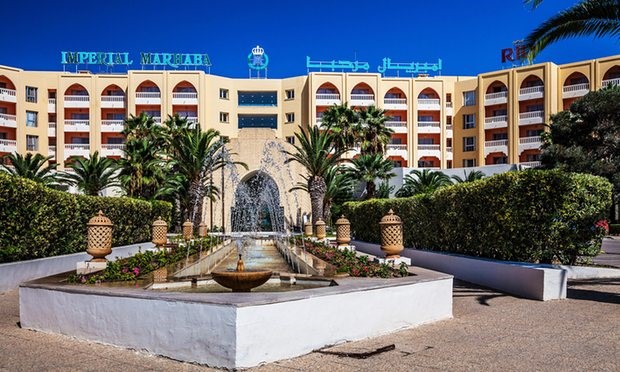 Since those attacks, Tunisia has built a 200km barrier stretching about half the length of its border with Libya in an attempt to prevent returning Tunisian militants from infiltrating back in to Tunisia.

Despite this barrier, in March 2016, Tunisia temporarily closed two border crossings with Libya in response to a deadly attack on the town of Ben Guerdan, near the Libya frontier, that killed 55 people, when around 50 IS militants stormed through the town. Tunisian authorities claimed to have killed 36 of the IS attackers.

This attack came one month (Feb 2016) after US airstrikes had killed around 40 IS militants in the famous Roman city ruins at Sabratha across the border in Libya, with US security officials describing as “likely” that the attack killed Noureddine Chouchane, believed linked to the earlier attacks in Tunis.

The Mayor of Sabratha confirmed the death toll and that the majority of those killed were Tunisian IS fighters (after effect of the US airstrikes, below, as provided by Sabratha Municipal Council). 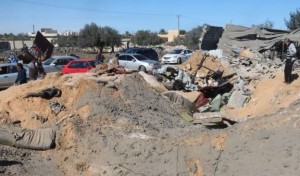 Libya has been plunged into anarchy and chaos since the 2011 “Arab Spring” uprising that toppled and killed Muammar Gadhafi. IS has exploited this chaos and established a stronghold in Libya at Sirte, the birthplace of Gadhafi

From the west (Tripoli and Misrata) and the east (Benghazi), Libya’s rival powers are now each moving towards Sirte, vowing to free it from the hold of IS. The risk is that they could very well end up fighting each other.

Rather than becoming a unifying cause, as the United States and Europe hope, the fight against IS threatens even greater fragmentation in Libya, torn apart as it is already among rival militias, tribes, governments and now parliaments.

Each of the rival powers see capturing Sirte from the IS militants as a way to gain advantage over the other, seize control of vital oil facilities nearby and gain legitimacy in the eyes of the international community.

The eastern power is commanded by Khalifa Hifter, the army chief based in Benghazi, whose forces have been battling Islamic militias the past two years in the eastern cities of Benghazi and Darna. Though backed by Egypt and the United Arab Emirates, he is widely despised in western Libya, where his opponents depict him as a “dictator in waiting”.

The western power is the Misrata militia, who have been the dominant force in the west since Gadhafi’s fall and who remain bitterly opposed to Hifter.

The moves from east and west on Sirte threaten to further undermine Fayez al-Serraj, currently the head of what is meant to be a national unity government as envisaged under a UN-brokered deal reached recently, after months of negotiations. With only patchy support from some factions, Serraj has been confined to a naval base in Tripoli since his return to Libya in March, unable to exercise much power beyond the naval base, much like his predecessors.

In a recent televised speech, Serraj condemned any unilateral assault on the IS stronghold, insisting any move to retake Sirte should be led by his administration, fearing any battle to liberate Sirte will become a further political bargaining tool.

Realistically however, Serraj has no military force to command, so it appears he may be aligning his “administration” with Misrata simply to thwart Hifter, who rejects Serraj’s government because the UN-brokered deal requires Hifter’s removal as head of the military, despite his popular status in Benghazi

To this end, this week Serraj ordered the formation of a command that would nominally lead any Sirte operation, comprised mostly of Misrata-based military officers.

In June 2015, IS militants captured Sirte (pictured below, parading in Sirte), located midway along Libya’s Mediterranean coast. Though the jihadis, many of whom are from Tunisia, have had little success at expanding their territory, their presence in Libya has raised alarm internationally. 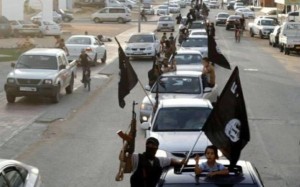 Though the US, Europe and United Nations had hoped that the creation of Serraj’s administration would unite Libya’s factions against IS, and provide a legitimate body that could receive foreign military assistance, the Tripoli-based government, dominated by Islamist factions including Islamic Dawn, has refused to recognise Serraj’s administration.

The second “Government” is based in the eastern city of Tobruk and backed by Hifter, who commands a potent force made up of army units and eastern tribal fighters. The parliament in Tobruk has been too divided to hold the UN mandated vote of confidence in Serraj, in part because Hifter’s allies are blocking it.

Therefore it seems clear that whoever succeeds in capturing Sirte would be in a prime position to shape any Government of National Accord.

UN envoy to Libya, Martin Kobler, warned of civil war, saying that “Libyans must not fight each other, they should jointly fight the common enemy,” referring to IS. It seems Kobler does not appreciate that a situation of civil war already exists in Libya

This week, military aircraft from Misrata struck fighters loyal to Hifter at oil installations in the Zallah area, 300km south of Sirte.

The Misrata militias were once the backbone of the Islamist-led government in Tripoli. But Misrata neighbours Sirte and has been highly concerned about IS control there, so Misrata politicians and militias have expressed support for the UN unity deal as a way to both fight ISIS and remove Hifter.

Animosity between Misrata and Sirte runs deep. Sirte was the birthplace of Muammar Gadhafi, and many of its residents were his diehard supporters and remain bitterly opposed to the current eastern and western leadership and militias. Misrata suffered heavily through Gadhafi’s crackdown early in the 2011 uprising against his rule. When the tide of battle finally turned (with NATO assistance) forcing Gadhafi to withdraw from Tripoli to Sirte, the Misrata fighters attacked Sirte, located Gadhafi and killed him and a number of his remaining loyalists.

In reality, Khalifa Hifter’s eastern forces probably have a better chance of taking Sirte, since he belongs to one of Sirte’s major tribes, al-Farjan and retains substantial support in the town.

In a sign of how violence may be stoked by the assault against Sirte, mortars hit a rally of hundreds of Hifter supporters in Benghazi this week, killing three people. Suspicion fell on IS who it is suspected have an active underground support structure in Benghazi.

General Hifter’s opponents are of the view that he intends to use the Sirte operation to capture nearby oil infrastructure currently in the hands of Ibrahim Jedran, a militia commander who backs the Serraj government. Jedran’s brother, Salem Jedran, who is mayor of Ajdabiya town, located close to the oil terminals, accused Hifter of aiming to control the oil.

“This could end up with a new civil war,” he said. “All forces here are waiting for the right moment to attack … There is no trust among any of the parties.”

However, a spokesman for Hifter claimed that the oil infrastructure is not the objective and that his forces would avoid them as they move towards Sirte

The next few weeks will determine the specific strategy of each force and whether the Govt of National Unity of Fayez al-Serraj will be able to consolidate its position and win over the rival militias to his side. The signs to date are neither encouraging nor positive and it is assessed that the civil conflict in Libya will not abate any time soon.