Two months after his dramatic arrival in Libya’s capital, Fayez al-Sarraj’s unity government has won international support but has had little impact inside a divided country plagued by Islamic jihadists, analysts say.

The head of the Government of National Accord sailed into Tripoli under naval escort on March 30 in defiance of a militia alliance that has been in control of the capital since August 2014, after it refused to let him fly in.

His arrival sparked hopes of a way out of the political, security and economic crises that have gripped Libya since the 2011 revolution that ousted long-time dictator Muammar Gadhafi.

But confined to the naval base where it receives visiting foreign ministers, the UN-backed GNA has yet to draw up any clear roadmap for ending Libya’s anarchy and expelling jihadists from their strongholds.

Its targets of restoring peace and healing divisions born of five years of conflict are being stymied by the rival government in the east (in Benghazi) that refuses to cede power until a repeatedly delayed vote of confidence in Libya’s elected parliament, from which it takes its own legitimacy.

The rival eastern administration, which itself had international recognition before the rise of Sarraj, controls eastern Libya through militias and units of the national army loyal to controversial General Khalifa Hiftar, a sworn opponent of the GNA.

The GNA has received a number of foreign delegations, and has even made a number of international trips, but in reality, within Libya itself, Sarraj is largely invisible, having failed to date to take any relevant and effective political initiative.

The map below shows the towns that have reportedly pledged allegiance to the GNA in Tripoli, but in effect Sarraj’s administration receives little practical support internally. 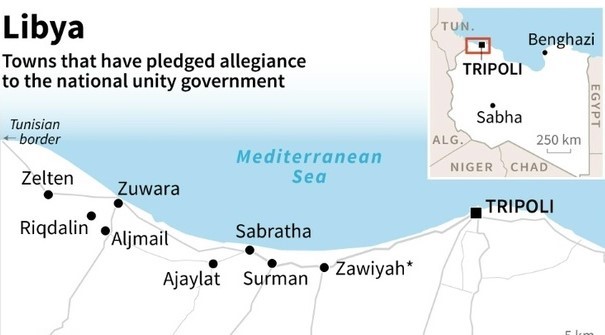 Othman Ben Sassi, a former member of the revolution-era National Transitional Council, said “the only achievement of this (GNA) government has been the fact that it has won international support, while on the ground it’s the militias, as before, that control the situation. As for the unity government, it doesn’t control anything”.

The situation confronting Sarraj, who is somewhat of a political newcomer in Libya, is extremely fragile, with his administration having little legitimacy outside of Tripoli. His inability to date to ensure security and commence negotiations with the different militias, to get them to lay down their arms, further complicates the political and security situation in Libya.

On the military front, the GNA controls several airports and has under its command militias and army units based in the western region around and in Misrata, equipped with tanks and warplanes in varying operational condition.

But the historic east-west divide rules out any unified control of Libya’s porous borders through which hundreds of thousands of sub-Saharan Africans pour, as they seek a better life across the Mediterranean in Europe.

And although Libya holds Africa’s richest oil reserves, the economy poses a huge challenge for the GNA, faced as it is with spiralling food, transportation and medical costs since the start of 2016.

With the Muslim fasting month of Ramadan starting in early June, food shortages and power cuts at a time of rising summertime temperatures will only serve to heighten the perception among ordinary Libyans of the Sarraj government’s failings.

Internationally, the GNA secured a Western pledge at a May 16 meeting in Vienna to ease the arms embargo in place since Libya’s revolution to battle the Islamic State jihadist group.

However, and unsurprisingly, Libyans themselves are fed up with Western interference in their affairs and the fact that the international community has imposed Fayez al-Sarraj will continue to undermine his legitimacy in the eyes of many ordinary Libyans.

UN Security Council Resolution 2278 states that oil exports from Libya must be placed under the authority of the GNA.

Libya’s National Oil Corporation and the Libyan Central Bank, the source of the country’s wealth, appear to have thrown their support behind the Sarraj government, in a blow to the rival administration in Benghazi.

The two institutions, which have struggled to remain neutral since Libya’s 2011 armed revolt and subsequent turbulence, said that they welcome the Government of National Accord, in separate statements.

Founded in 1970, the National Oil Corporation (NOC) is based in Tripoli where Libya’s Central Bank – the depositor of the country’s oil wealth – also has its headquarters.

Despite the support of Sarraj by the UN, the current Tripoli administration, established after the powerful Libya Dawn militia alliance overran the capital two years ago, has demanded that Sarraj leave or surrender, branding the GNA “illegal”.

Oil is Libya’s main natural resource, with reserves estimated at 48 billion barrels, the largest in Africa. The North African nation had an output capacity of about 1.6 million barrels per day before the uprising against Gadhafi, accounting for more than 95% of exports and 75% of the country’s budget.

But production has slumped amid violence as rival forces have battled for control of oil terminals.

Control of the oil industry is the key for the GNA, which not only needs to unite the country but also shore up an economy weakened by the drop of oil prices on the international market.

Since the revolt, and the emergence of two rival administrations, the Central Bank has struggled to keep the country afloat, urging tough spending cuts and hinting that it has had to dip into deteriorating foreign reserves.