Mali’s President Ibrahim Boubakar Keita (“IBK”) told the United Nations during the recent leaders gathering in the General Assembly that “extremist and terrorist” groups were growing in his war-torn country, where increased clashes were slowing peace efforts.

President Keita told the opening of an international meeting on Mali, on the sidelines of the 71st UN General Assembly that “tangible progress has been achieved” since peace accords (Peace and Reconciliation Agreement) were signed in 2015, but the “growth of terrorist acts and banditry in the centre of the country and the growth of extremist and terrorist groups” affiliated with al-Qaeda and the Islamic State group are undermining peace efforts.

The President also spoke about increased trafficking in weapons, drugs and migrants and “clashes between signatory members of the Accord”. Clashes between Malian armed groups in defiance of the peace deal killed at least a dozen people in mid-September in the restive Kidal region of northern Mali.

“All these factors create a harmful environment” Keita said, despite stressing his commitment to the peace accord. The President announced that Mali’s Government will convene a national conference of understanding later this year to “bring about a common vision”.

In response, French Foreign Minister Jean-Marc Ayrault said that “it is vital, essential to accelerate implementation of the Agreement” while hailing progress made since 2013.

After Northern Mali fell into the hands of jihadists linked to al-Qaeda in early 2012, a French military intervention in 2013 drove Islamist fighters away from major urban centres, but despite the 2015 peace deal aimed at ending fighting in the north and turning the page on the Islamist takeover, large tracts of the sub-Saharan country are still not under the full control of Malian troops.

The UN also voiced concerns over Mali’s shaky peace deal, following deadly clashes between groups that have signed up to the agreement.

The clashes between pro-government group GATIA (the Imghad and Allies Tuareg Self – Defence Group) and ex-rebels from the Coordination of Azawad Movements (CMA) left around a dozen fighters dead around Kidal.

“These clashes, as well as constituting repeated violations of ceasefire accords, threaten the progress achieved up until now in the implementation of the peace agreement,” the UN’s mission in Mali, known by the acronym MINUSMA, said in a statement.

The mission expressed “serious concern over the deterioration of the security situation and over reported allegations of human rights violations” and complained that the unrest was hampering the delivery of humanitarian aid.

The UN called on all parties involved in the peace deal to “take immediate measures to guarantee the protection of civilians and refrain from all action that could unleash a return to hostilities”.

GATIA said this week that it had pushed the CMA out of two key villages in the region, including Khalil, a strategic frontier settlement which sees the transit of all imports from Algeria into northern Mali.

As a sign that efforts to reassert law and order across the north of Mali are improving, in late September, the International Criminal Court (ICC) sentenced former Malian fighter Ahmad al-Faqi al-Mahdi to 9 years imprisonment for destroying shrines and historic sites in Timbuktu in 2012

In a landmark judgement that experts hope will send a strong message to safeguard the world’s historical monuments, al-Mahdi became the first person to be convicted by the ICC of cultural war crimes. 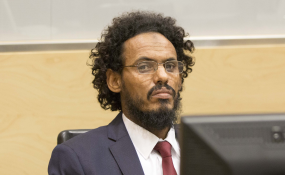 During his 2-day trial in August, al-Mahdi asked for forgiveness, while urging all Muslims not to follow his example.

Al-Mahdi had admitted to the charges of involvement in the destruction of historic mausoleums in Timbuktu, with prosecutors saying that he led a group of religious police, using pick axes and crowbars to destroy 9 mausoleums and the door of a mosque. Despite Timbuktu being revered as the epicentre of Islamic learning during Mali’s 14th century “golden age”, Islamist fighters condemned the city and its monuments as “idolatrous”.

The recent history of Mali reflects security issues that have come to a head as a direct consequence of the overthrow of Muamar Gaddafi in neighbouring Libya. In early 2012, Tuareg separatist rebels from the National Movement for the Liberation of Azawad (MNLA) seized strategic cities in Mali’s northern territories before eventually overthrowing the central Government in Bamako.

In January 2013 the Economic Community of East African States (ECOWAS) and the United Nations eventually stepped in, in an effort to counter the separatist movements. Ansar Dine, MUJAO and AQIM (all extreme Islamist movements) became the major combatants in the conflict. French intervention, with 400 troops committed to Mali under “Operation Serval” commenced once Ansar Dine captured 3 major strategic points in the northern region – Kidal, Gao and Timbuktu.

However, these 3 Islamist groups had little to do with the earlier Tuareg separatist movement that initially tipped the country into armed conflict. For a short period, the MNLA and Ansar Dine fought alongside one another, against the Mali Government and Army, but eventually clashed over differences as to how to govern the captured towns.

In 2016, Mali is now in the process of rebuilding the State and through its efforts to reboot its economy, has managed to tame to a degree the conflict, and to refocus on growth, with foreign intervention deemed a success by the French Government, international institutions and regional African states.

In reality, the Sahel’s long and porous borders allow for heightened regional security threats, as demonstrated by the January 2013 In Amenas hostage crisis across the Mali border, in Algeria. Both ECOWAS and the AU backed France then, and both organisations continue to cooperate across West Africa through “Operation Barkhane”, a continuation of “Operation Serval” and now extended to five countries across the Sahel.

There is general sub-Sahara approval for French troops assisting a fragile state such as Mali against a violent regional Islamist threat, therefore little in the way of opposition (or claims of neo-colonialism) from the wider continent. But while the narrative of international powers tackling highly organised terrorist factions is popular in Africa and Europe, in reality the positive effects of “Operation Serval” appear to be fading. By driving Islamists out of northern Mali population centres but not eliminating the threat entirely, neighbouring States such as Mauritania and Burkina Faso have in effect been weakened. The consequences of retreating Islamist fighters roaming around the Sahel region are becoming evident, through increased car bombings and general population displacement and insecurity.

Having extended “Operation Serval” to “Operation Barkhane”, France is now operating around 3000-4000 troops in 7 African countries, engaged on general counter terrorism efforts, based in heavily equipped military bases in Chad, Niger and Burkina Faso, in its attempts to ensure peace and security regionally.

Post-conflict Mali rightfully expected structured peace building programmes, to foster unification between the Government and the various separatist groups, along with adequate development aid to connect the northern region to the wealthier south. Instead it appears to many in Mali that France may have established “Operation Barkhane” simply as a search and destroy mission only, with the objective of the elimination of the terrorists, raising questions as to the sustainability of that option alone. Without stable Governments catering to the needs of their populations, rebel movements will in all likelihood continue to operate across the Sahel, affecting investor confidence and the security of investments (assets and personnel).