On 9th December, two female suicide bombers struck at a busy market in the north-eastern town of Madagali, killing at least 30 people, in the latest bloodshed to hit the country’s restive northeast. 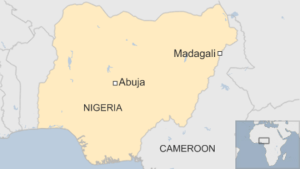 The attack on the town, which was recaptured by Nigerian forces from Boko Haram jihadists in late 2015, was the third time the town has been targeted since December 2015. The National Emergency Management Agency (NEMA) confirmed the attack.

While there was no immediate claim of responsibility, the blasts bore all the hallmarks of Boko Haram, which has regularly used women and young girls to carry out suicide attacks in its seven-year insurgent campaign in the troubled region.

A bus station near the same market was also targeted in December 2015 by two women suicide bombers, killing 30 people.

Then in June 2016, Boko Haram extremists opened fire on mourners at a funeral in the town, killing another 18 people.

This week, on 7th December, President Buhari told a security conference in Senegal that the situation in the region was “under control”. He also said that the multinational force from Nigeria and neighboring states is readying “to move simultaneously and spontaneously for us to see the end of Boko Haram.”

Buhari said the insurgents “are done for” in the Lake Chad Basin bordering Nigeria, Chad and Niger. However, just one year earlier, in December 2015, Buhari had declared that Boko Haram was “technically defeated”, but in reality, Nigeria’s military campaign against the jihadists is increasingly bogged down as it confronts suicide attacks, looting and indiscriminate slaughter.

The United Nations suggested that more than 1 million people are now believed trapped by ongoing fighting, without food or medical help, and facing what the international body described as “the largest crisis in Africa”.

In northern Borno state, which includes the town of Madagali and the regional centre of Maiduguri, considered the epicentre of the insurgency that has since spread to three neighbouring countries (Chad, Cameroon and Niger), Nigeria’s army has unleashed a barrage of air and land assaults. 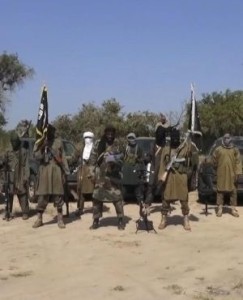 The counter-insurgency by the Nigerian military has clawed back some territory, but Boko Haram has responded by stepping up guerrilla tactics, ambushing troops when it can and terrorising civilians when it cannot.

Villagers under siege are typically forced to abandon their crops, devastating local food supplies. Those who are subsequently liberated by the army are then generally transported to holding camps where basic supplies are also desperately scarce.

The scale of humanitarian suffering has become more apparent as troops recapture and discover the “scorched-earth” conditions of villages that have fallen into the hands of Boko Haram. But local people complain that there are not enough security forces deployed to effectively battle the Boko Haram menace.

Only this past week, 5 people were killed in insurgent raids on villages near Chibok, the district that gained notoriety for the Boko Haram kidnapping of more than 200 schoolgirls in 2014.The Boko Haram raiders looted and burned houses, set fire to crops that were ready for harvesting, and killed the locals, even though the army had reportedly been alerted to the assault.

Though Boko Haram has been weakened and casualty numbers followings its attacks are often low, the frequency of their strikes enable it to keep up the pressure on security forces and force them to deploy additional troops and assets, stretching the military further.

Troop numbers are also being pulled away from the north-east to fight on a second front, in Nigeria’s south, where militants have been sabotaging oil pipelines and other installations vital to the country’s export earnings in a fierce dispute over local autonomy and the distribution of billions of “petrodollars”.

And with tensions mounting between Shiite and Sunni Muslim communities in the country’s northwest, central authority is struggling to guarantee security for Nigeria’s 180 million people.

The number of killings in the northeast, which increases after the end of the rainy season each year, is a cause for concern, especially along the border with Niger.

Territory in Niger has now become the stronghold of Abu Musab al-Barnawi, who was declared a local leader after Boko Haram declared its allegiance to the Islamic State (IS) jihadists in Iraq and Syria (and later in Libya).

Adding to the continuing threat, recent successful military operations in Libya against the Islamic State jihadists has pushed IS activities further south, to those countries bordering Nigeria, effectively increasing the ability of IS militants to supply Boko Haram jihadists in Nigeria with additional weapons, munitions and manpower, as part of their declared “Islamic State of West Africa Province”.

But while IS and Boko Haram fighters continue to battle the Nigerian army, hunger is spreading among both villagers and the swelling ranks of displaced people in the ravaged northeast.

The UN has warned that up to 75,000 children in the region are imminently at risk of death within a few months.

What the World Food Programme has called “famine-like” conditions has prompted political and military observers and analysts to warn the Nigerian Government against seeking an elusive “total victory” over the jihadists at all costs.
The UN estimates that up to 14 million people will need outside help in 2017 because of the ongoing violence, particularly in Borno State, the epicentre of the rebellion.

The UN envoy for Central Africa, Francois Lounceny Fall, told the Security Council this week that the multinational regional force has reclaimed much of the territory controlled by Boko Haram in the Lake Chad Basin, but the extremist group remains a serious threat to regional stability, while the group’s ability to continue to cause mayhem should not be under estimated.

The UN envoy said the countries of Lake Chad Basin continued to fund the regional force as best they could within their constrained financial capabilities, but an overall lack of sufficient funding was hampering efforts operationally as well as in terms of providing support to the large number of people displaced by Boko Haram, whose fighters continue to disrupt humanitarian access. 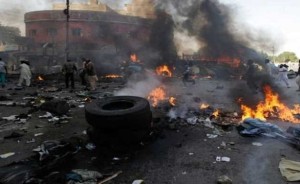 The UN envoy stated the view that eradication of the group will remain a long-term challenge requiring the root causes of violent extremism, including marginalisation and poverty, to be properly addressed, in tandem with pure military operations.

Further complicating the Nigerian Government’s attempts to combat Boko Haram terrorism in the north and, in the south, those militant groups becoming increasingly active in the Niger Delta, on the sectarian front Northern Nigeria appears to have become the latest battleground in a proxy war between Iran and Saudi Arabia, after violent clashes between supporters of rival groups from the two main branches of Islam.

In October, members of the Sunni Izala movement (Jama’at Izalat al Bid’a Wa Iqamat as Sunna – Society of Removal of Innovation and Re-establishment of the Sunna), backed by mainly Sunni Muslim Saudi Arabia, attacked adherents of the Shia Islamic Movement in Nigeria (IMN), which is sympathetic to Shiite majority Iran.

IMN ceremonies in at least four northern cities to mark the annual Shiite day of mourning, Ashura, were targeted, with the worst riots in Kaduna, an Izala stronghold. At least two IMN supporters were killed there.

Sectarian tensions in Nigeria’s Muslim-majority north had already been running high, especially in Kaduna, after the state government had earlier banned the IMN as an unlawful group and a security threat.

That followed a recommendation from the judicial inquiry commissioned by the State Government to investigate clashes in Zaria city in late 2015, in which Nigerian soldiers reportedly killed more than 300 IMN members.

Those clashes, and the recent escalating tensions, indicate that the proxy Saudi-Iran conflict (demonstrated in Lebanon, Yemen and Syria) appears to be playing out in Nigeria, some observers said.

Iran’s President Hassan Rouhani called for restraint and accused “a group” of “sowing the seeds of discord among Muslims in Islamic countries” in what appeared to be a reference to Saudi Arabia.

Nigerian media reported that Saudi King Salman bin Abdulaziz al-Saud has backed Abuja’s crackdown on the IMN, describing it as the Nigerian Government continuing the “fight against terrorism”, but by interfering openly in what are clearly Nigerian domestic issues, his overt support and commentary has brought to prominence the serious and deteriorating sectarian undercurrents.

Though the Sunni jihadists of Boko Haram have killed at least 20 000 people (both Shia and Sunni) in northeast Nigeria since taking up arms against the government in 2009, Riyadh has largely refrained from openly backing Nigeria’s fight against the Sunni rebels, but appears to have commented quickly on the IMN.

In March 2016, Saudi clerics attended an Izala-organised conference focused on “deviant Islamic ideologies” in Nigeria and these clerics have since been preaching the conservative Saudi Wahhabism ideology throughout Nigeria.

In May 2016, Iran’s envoy to Nigeria called for the release of IMN leader Ibrahim Zakzaky and described his detention as “unfair”, straining diplomatic ties between Nigeria and Iran. He was later recalled to Tehran, presumably at the request of the Nigerian Government.

A senior Nigerian security officer said IMN’s religious beliefs are immaterial but rather that its alleged disregard for law and order was the issue, as was its lack of recognition of the Nigerian State.

IMN started out as a local student movement in 1978 and later morphed into a Sunni revolutionary group inspired by the Islamic revolution in Iran in 1979.The group switched to Shia Islam in 1996 due to its leader, Ibrahim Yaqoub el-Zakzaky’s close association with Iran, worsening mutual resentment with the conservative Sunni Wahhabi ideology, including Izala, which had itself been founded in Nigeria in 1978 by a Saudi-trained cleric.

Izala was established 1978 in Jos, Nigeria by Sheikh Ismaila Idris and is now one of the largest Islamic societies through Nigeria, Chad, Niger, and Cameroon. It has received substantial funding from the Saudi Arabian-funded World Muslim League, and from wealthy adherents, allowing it to establish mosques and schools. It also encouraged members to participate in politics, gaining influential government allies. Despite this, the Izala Society has been labeled as infidels by Boko Haram due to its willingness to work hand in hand with the Nigerian government

Izala’s preaching against IMN and Shia Islam has increased through 2016. It openly supported the military crackdown in the town of Zaria in late 2015, and even called for harsher action.

According to Muhammad Ibrahim, the editor of the prominent Nigerian Shia newspaper, Ahlubayt, “ordinary people took the ban on IMN as a general ban on Shia Islam, because IMN is the more prominent Shia group due to its public activities, like street procession. This worried us because we saw how Izala (Sunni) followers were spreading information that the Government had banned Shia, and the people began to believe it.”