The Vice President of Nigeria Yemi Osinbajo has made the astonishing claim that up to USD15 billion was corruptly siphoned from funds intended to be used in the fight against Boko Haram during the Goodluck Jonathan administration. This is reportedly around 50% of Nigeria’s current foreign exchange reserves, estimated to be around USD27 billion.

During Mr Jonathan’s rule, Nigerian Army commanders and soldiers frequently complained that they were too poorly equipped to combat Boko Haram, and on a number of occasions, troops refused outright to deploy to the operational area to fight the militants. In one reported incident in Kaduna, troops opened fire on their own unit commanders rather than deploy to the field. They were subsequently tried for mutiny

Since President Muhammad Buhari came to office in early 2015, a number of close associates of the former President have been arrested and charged with fraud through the award of false arms contracts. These associates include the former National Security Adviser Mr. Sambo Dasuki, a number of former military chiefs, and a variety of local contractors.

Since coming to power, President Buhari has claimed that he inherited an “empty treasury” due to massive corruption and outright theft of funds.

The current Boko Haram leader Abubakar Shekau (below, centre) pledged allegiance to Islamic State in early 2015, to become “IS Western Africa Province”. Shekau has been reported to have been killed a number of times over the past 2 years, but he continues to surface in videos taunting the Nigerian Govt. Despite having a price of USD7 million on his head, he has yet to be located and captured. 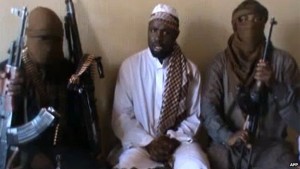 From its establishment in 2002, and its first military operations in 2009, Boko Haram activities have escalated and they now threaten neighbouring states of Cameroon, Chad and Niger.

Despite recent military successes against the organisation, they remain a threat in the N-E of Nigeria. They even reached into the heart of the Nigerian state in 2011 when the Police HQ and the UN complex in Abuja was bombed, and subsequently in 2014,twin bomb blasts ahead of the World Economic Forum killed an estimated 75 people and caused substantial damage. More notoriously, in March 2014 200 schoolgirls were kidnapped from their school in Chibok in Borno State (see map below) and they remain missing to this day. 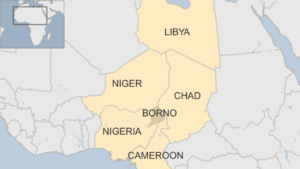 With the Libyan state moving towards failure through a deteriorating security situation and multiple militias at each other’s throats, there are concerns that Boko Haram in Nigeria and Al Qaeda in the Islamic Maghreb (AQIM) active in Mali and Niger, will continue to receive arms along the route south from Libya through Niger and into Nigeria.

A poorly trained and, judging by this week’s claim by the Vice President, a seriously underfunded Nigerian Army will therefore continue to find it difficult to dominate terrain and protect its borders.

OAMME’s travel advice is to steer well clear of the North and East of Nigeria as the threat is two sided, from a wounded but still dangerous Boko Haram and a poorly trained and ill-disciplined Nigerian Army suffering low morale and uncertain about an appropriate strategy to defeat Boko Haram