President Muhammadu Buhari has ordered security to be stepped up in Nigeria’s oil-producing south, after a spate of attacks blamed on local militants that he said threatened the economy.

Buhari met this week with senior executives of the Anglo-Dutch oil group Shell, whose Nigerian subsidiary has been targeted in recent months by a group calling itself the Niger Delta Avengers (NDA). 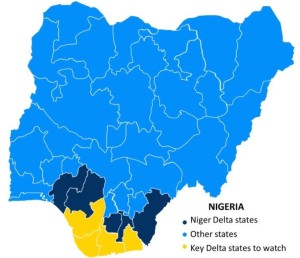 The NDA wants a fairer share of oil revenue for local people and wants a government amnesty programme that brought similar unrest to an end in 2009 to be continued.

Since the Buhari administration recently ordered the issuance of an arrest warrant for members of the Movement for the Emancipation of the Niger Delta (MEND) including its ex-leader, the country has seen a spike in attacks on oil facilities this year. Most notably, there was an attack on the Chevron offshore facility this month, following an earlier attack on the Forcados pipeline (operated by Shell) in late March. The NDA have taken credit for both attacks. but after being elected in 2015, Buhari extended the 2009 amnesty granted to 30,000 former militants in the area so his recent decision to order the arrests is perplexing.

At the height of its activity, MEND slashed Nigeria’s output by around 50% and cost the government $19 million in daily defence outlays.

As a consequence, Nigeria has now lost its status as Africa’s leading oil producer to Angola because of the cut in output from continual sabotage, attacks and leaks.

The Nigerian government relies on oil exports for 70% of its revenue but has seen income slashed drastically because of a global slump in the cost of crude. The Govt budgeted for 2.2 million barrels per day this year, but Vice President Yemi Osinbajo has said output is now at just 1.4 million bpd.

The cuts in production reflect the deteriorating political and security dynamics that pose an immediate threat to Nigeria’s oil output. And they come as the country continues to suffer from numerous economic headaches including lower oil prices and the government’s controversial foreign exchange and price control policies.

The NDA, as with MEND, want locals in the Niger Delta to have more control over oil resources in the region and to benefit from higher living standards, along with the continuation of the Niger Delta amnesty program.

Their agenda seems to echo that of MEND. At the time of its rebellion, before the Niger Delta Amnesty, MEND portrayed itself as a “political organization that wants a greater share of Nigeria’s oil revenues to go to the impoverished region that sits atop the oil”.

The NDA are not party to that (possibly now defunct) Amnesty program. The NDA first came under the spotlight in February 2016 and has vowed it will carry out attacks until the perceived marginalisation of people in the Niger Delta comes to an end.

“From our analysis….90% oil blocs are allocated to individuals from northern Nigeria,” the group said in a statement published on its official website. “To owners and operators of these oil blocs in our region, the (NDA) is giving you two weeks ultimatum to shut down your operations and evacuates your staff. If at the end of the ultimatum you still operating, we will blow up all the locations. It will be bloody. So just shut down your operations and leave.”

The group, which claims it intends to start a “revolution to free Nigeria from the “wicked administration”, also called on the United Nations and world leaders to pay attention to alleged crimes committed in the Niger Delta.

“We are not asking for much, but to free the people of the Niger Delta from environmental pollution, slavery and oppression. We want a country that will achieve its full potentials, a country that will make health care system accessible by everyone. With Niger Delta still under the country Nigeria, we can’t make it possible. By October 2016 we will display our currency, flag, passport, our ruling council and our territory to the world.”

A statement from Buhari’s office said Nigeria’s naval chief had been ordered “to reorganise and strengthen the military joint task force (JTF) in the Niger Delta to deal effectively with the resurgence of militancy and the sabotage of oil installations”.

JTF operations “were also being enhanced with increased support and cooperation from the United States and Europe in the areas of training, intelligence, equipment and logistics”, it added. Buhari has accused NDA of vandalism and warned the Nigerian government will deal with NDA in the same way as it is dealing with Boko Haram terrorists in the country’s north-east.

In NIGER, meanwhile, after concluding a two-day mission to the north African country, the top United Nations humanitarian official has called for greater attention to the crisis unfolding in the country’s Diffa region, where violence at the hands of Boko Haram has forced more than 240,000 people out of their homes on both sides of the border with Nigeria.

Stephen O’Brien, Under-Secretary-General for Humanitarian Affairs and the UN’s Emergency Relief Coordinator, said in a press release “I am appalled by reports of killing of civilians, looting of villages, and other abuses perpetrated by Boko Haram in the countries around the Lake Chad Basin, including Niger,”

“Adherence to international humanitarian law and norms is fundamental in conflict and it applies to all parties, without exception,” he said.

In the Diffa region, Mr. O’Brien visited the Assaga site, which hosts more than 15,000 people, including refugees, returnees and internally displaced people who had been recently forced out of their homes due to Boko Haram attacks. Two out of three people in the region have experienced displacement. The country’s southern Diffa region has become a haven for refugees fleeing the group in other areas.

O’Brien said they discussed ways to step up the humanitarian response for people affected by Boko Haram, as well as the challenges that Nigerians continue to face despite the Government’s commitment to build people’s resilience to recurrent food insecurity and malnutrition crises.

The humanitarian community has launched a Humanitarian Response Plan for 2016 targeting 1.5 million people with a budget requirement of $316 million. So far, only 25 per cent has been received, which is “clearly insufficient” to meet the immediate needs, the Under-Secretary-General said.

Mr. O’Brien noted that a comprehensive approach is urgently needed to ensure greater collaboration between the political, security, development, environmental and humanitarian efforts to maximize scarce resources and to ensure no one is left behind. “A big, compounded crisis needs a big, compounded response,” he concluded.

The Under-Secretary-General reiterated that he had specifically decided to visit the Lake Chad Basin region ahead of the World Humanitarian Summit to bring attention to the “chronic and endemic” life conditions for millions of people as a result of the six-year “brutal campaign” by Boko Haram.

At least six civilians died and another seven were injured in an attack reportedly carried out by Boko Haram jihadists in Niger, the Niger army said on Friday. The Nigeria-based terrorists have frequently launched cross-border raids in their attempt to create a state based on Islamist Sharia law.

The attack occurred on 19 May near the south-eastern town of Bosso, close to the Nigerian frontier, authorities confirmed. Boko Haram fighters struck the village of Yebi after dark, setting fires at the market and at ten private homes. They arrived on foot and horseback and made off with vehicles after the carnage.

“Search operations are ongoing in the area to neutralise these terrorists,” said an army statement broadcast on state TV and radio.

The Defense Ministry added that the victims had either been shot or burned alive before the area was evacuated. Niger has been plagued by repeated Boko Haram attacks since the organisation began attacks there in February 2015.