President Muhammadu Buhari has finally confirmed that his administration is in talks with elements of the Niger Delta militants, with the assistance of oil companies and law-enforcement agencies, to find a lasting solution to the insecurity in the region.

In a recent statement issued in Abuja by the Presidential media office, Buhari spoke of the government’s engagement with the militants in the oil-rich region and stated that the government is studying the instruments of the original Amnesty Programme inherited from the previous Goodluck Jonathan administration, with a view to implementing the commitments made but which remain undelivered.

But as he said this, the Niger Delta Avengers (NDA), the militant group that has claimed responsibility for the recent wave of attacks on oil assets in the region, issued another threat to oil workers, warning them to vacate the oil fields and terminals because it was ready to wage “dirty” warfare.

“We are warning NUPENG and PENGASSAN to leave all the oil field and terminals in the Niger Delta because it will be dirty very soon. Foreigners are to leave too,” it warned.

The NDA also reacted angrily to the recent claim by the Nigerian Navy that the NDA’s logistics supplier had been arrested, and upbraided the Navy as having lost all sense of professionalism by claiming that every suspect arrested is a member of the NDA.

“As it is now any Tom, Dick and Harry is a suspect of the Niger Delta Avengers. The Nigerian Navy has lost all sense of professionalism”.

The NDA also criticized the Nigerian Army and Police for always denying successful militant attacks on oil pipelines. “When Niger Delta Avengers carry out any major attack they (Nigeria military) deny it. First was the NNPC pipeline that was blown, second the 48-inch ExxonMobil pipeline that was blown by NDA. Mobil and the government denied it, only for ExxonMobil to declare force majeure a few days after the attack” the NDA stated. 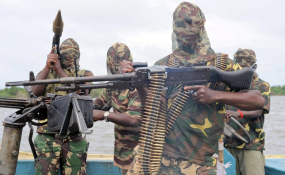 The militant group maintained that the Qua Iboe export pipeline operated by ExxonMobil, which was attacked in mid-July, remained non-operational. “This is a subsidiary of Mobil and it is the biggest export stream in Nigeria. They export one million barrel every two days. (NDA Commander) Brig-Gen Agbinibo personally led this operation. We want to make this clear, all Niger Delta Avengers operatives are intact, our intelligence agencies are all intact and our operative teams are in high spirit because we are winning the war”.

Meanwhile, the Nigerian National Petroleum Corporation (NNPC) has again confirmed that Nigeria’s 2016 budgetary projections have been grossly impacted by renewed militancy in the Niger Delta.

The state-owned oil firm also restated that pipeline vandalism in the region has led to the curtailment of about 700,000 barrels of crude oil per day, whereas the 2016 national budget plan was based on 2.2 million bpd of crude oil production.

The NNPC Group Managing Director(GMD) confirmed this when he recently met with the Chief of Defence Staff (CDS) in Abuja, at which time he claimed that the country’s power sector has been seriously impacted by the heightened militancy in the Delta region, and that from January to May 2016, nearly 1500 incidents had been recorded, resulting in the loss of the equivalent of over 100 million litres of petroleum products and the equivalent of 560,000 barrels of crude oil to the nation’s refineries in Warri, Port Harcourt, and Kaduna.

Nigeria’s energy supply security is underpinned by a network of over 8,000kms of pipeline assets used in the transportation of crude oil, petroleum products and natural gas. These critical assets have become the subject of incessant vandalism, theft and sabotage.

The NNPC GMD stated that “domestic natural gas supply to power is equally impacted with an estimated drop of about 50%, resulting in significant power outage exposure of between 2,500MW to 3,000MW as a result of direct and indirect impact.”

He also noted that contributing to the challenges confronting the NNPC is the frequent kidnapping of personnel and ongoing piracy in the Corporation’s areas of operations, while “other impacts include loss of lives, high cost of operations, refinery shutdowns, fuel crisis and large scale environmental degradation, and the attendant cost of oil spill clear-ups”.

He requested that the Chief of Defence Staff (CDS) facilitate and sustain the deployment of military personnel to NNPC’s critical operational facilities, to provide support to its corporate and strategic business units that require a strong security presence, and to provide support for the corporation’s re-entry into the Lake Chad Basin and Benue trough for resumption of exploration and drilling activities. 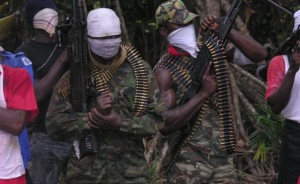 The Director of Army Public Relations (DAPR), Colonel Sani Usman, in a statement released on 27th July, said that the Nigerian Army will, from 30th July, commence a major training exercise in the 82nd Division and 2nd Division areas of responsibility, covering the Delta region.

Colonel Usman said that the aim of the exercise is to rehearse Nigerian Special Forces and other units of the Nigerian Army in amphibious and internal security operations in the Delta’s riverine environment, in support of the civil authority, and he urged members of the public not to be concerned by the sight of the movement of large number of troops, heavy military weapons and equipment, this being in response to previously expressed complaints from local communities that the Nigerian Army has been heavy handed in its response to NDA attacks in the Delta.

It is also understood that, barring any major progress in the ongoing dialogue between the federal government and stakeholders in the Niger Delta to end the attacks on oil and gas installations, the Nigerian military is in the process of finalising plans to launch a major new offensive against the NDA and other militants sabotaging facilities in the oil-rich Delta region.

A senior officer confirmed that though more resources and equipment would be needed, especially for the Nigerian Navy, the time being used for the current process of dialogue with the militants would provide Defence with the opportunity to gather additional intelligence and fine-tune strategies with other security agencies ahead of any major offensive.

The Chief of Army Staff (COAS), Lt-Gen. Tukur Buratai, recently confirmed that the command and control (C2) of the Niger Delta region has been handed over to the Nigerian Navy, on the basis that the Navy is more conversant with the terrain and would have an advantage in dealing with NDA militants inside the waterways, though the army still maintains a small amphibious capability (see photo following) to operationally support the navy and other security forces 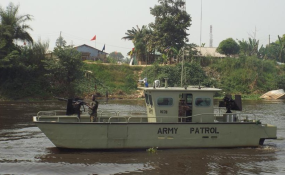 The Movement for the Emancipation of the Niger Delta (MEND) has confirmed that the federal government is in dialogue with some militants in the region, through oil companies and the various law enforcement agencies.

However, the MEND statement contrasted with that of the NDA, which denied that it is in talks with the federal government.

“The Movement for the Emancipation of the Niger Delta (MEND) wishes to confirm that indeed it has been in preliminary talks with the federal government through oil companies and law-enforcement agencies as revealed by President Muhammadu Buhari on Thursday, July 21, 2016.These preliminary talks are the precursor to a wider dialogue between the federal government and the MEND peace initiative, which will seek to find solutions to the short, medium and long-term future of the Niger Delta region.”