President Ali Bongo, sworn in to a second term as Gabon’s president on 27th September, following disputed election results from the 27th August elections, has long sought to emerge from the shadow of his father, Omar Bongo, who ruled the country for 41 years until his death in 2009.

In a ceremony conducted at the Presidential Palace, and attended by the Presidents of Mali, Niger, Togo, and the Prime Ministers of Chad, Senegal, Central Africa Republic and Morocco, Ali Bongo pledged to “devote all my efforts for the good of the Gabonese people and to ensure their well-being… and respect and defend the Constitution and the rule of law”.

Gabon has large oil, mineral and tropical timber resources, and its per-capita national income is four times greater than that of most sub-Saharan nations, but as with so many countries in Africa, a third of the population of 1.8 million live below the poverty line – a gap that has fuelled resentment towards a regime notorious for corruption.

Mindful of that mood across the country, Ali Bongo campaigned in the August 27 elections on the slogan “Let’s change together.”

He managed to shed his reputation as a dry, reticent man, coming to life on the campaign trail by cracking jokes and going head-to-head on stage with hired rap groups.

Ali Bongo was born Alain Bernard Bongo on February 9, 1959, in the Congolese city of Brazzaville, which at the time was still part of France’s rapidly shrinking colonial empire.

Bongo has strenuously denied his detractors’ allegations that he was actually an adopted son born in Nigeria, and therefore ineligible to run for president in Gabon. His father, who came to power in 1967 upon the death of Gabon’s first post-independence leader, was serving in the French armed forces at the time of Ali’s birth.

His mother, Patience Dabany, was a singer, who went on to serve as first lady of Gabon for almost 20 years, before returning to pursuing a musical career in the United States after her divorce from Omar Bongo.

The young Bongo attended some of Brazzaville’s top schools and went on to study law in France.

But his prestigious education did not extend to learning any of his country’s local languages, a lapse that many have held against him.

From a young age, Bongo worked as a close aide to his father, travelling the world and building up extensive contacts in the US and in the Arab world.

Like his father, Bongo junior converted to Islam and took an Arabic first name in the 1970s, at a time when Arab oil-producing nations were flexing their economic muscle. In August 1989, he was appointed foreign minister at just 30 years of age, but had to step down two years later, when a new Constitution stipulated that cabinet members had to be at least 35.

He was back in government by 1999, at the head of the Defence ministry, where he remained until shortly before the start of the election campaign caused by the death of his father in 2009.

Bongo is one of two of the late president’s children who have occupied key posts. His elder sister Pascaline served as her father’s chief-of-staff from 1994 until his death. Omar Bongo liked to claim that the two of his children who worked for him were only there because of their talent, and not due to nepotism.

Well before Omar Bongo’s protracted illness and death, it became clear that his son had his eye on the Presidency, despite some opposition in the ruling Gabonese Democratic Party (PDG), and the shadow of corruption left by his father. Omar Bongo had been under investigation in France over the ownership of luxury properties, including apartments in Paris and the Cote d’Azur resort of Nice.

Following his re-election and inauguration, President Ali Bongo called for “political dialogue” with the Opposition after the Constitutional Court upheld his narrow victory.

“I call all political leaders, including the defeated candidates in the August 27 election, for a political dialogue,” to steer the country out of the political crisis sparked by the announcement of his re-election, Bongo said in a speech broadcast on television, after Gabon’s Constitutional Court rejected the appeal by rival Jean Ping, who had called for a recount over widespread allegations of fraud.

Ping, 73, a career diplomat and a former top official at the African Union, had been hoping to end the Bongo family’s 50-year grip on power in the oil-rich country of 1.8 million people, despite having served as Foreign Minister under Omar Bongo (“Papa Bongo”) and having been in a relationship with Ali Bongo’s sister Pascaline, fathering two children with her

The Constitutional Court, while partially changing the results of the close August 27 vote, said Bongo had maintained a lead over his former ally-turned-opponent Ping, taking 50.66% of the vote (172,990 votes) against 47.24% (161,287 votes) for Ping. 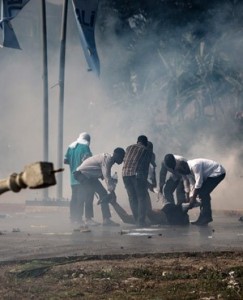 The announcement of Bongo’s victory after the bitterly fought election had sparked days of deadly violence.

In his legal challenge, Ping had asked for a recount in the Bongo family stronghold of Haut-Ogooue province, where Ali Bongo won more than 95% of the votes, with a declared turnout of more than 99 percent, leading EU observers to state that there had been a “clear anomaly” in those results. International election observers claimed, post-election, that Bongo had had an advantage during the election, through his greater access to money and the media.

“I congratulate Gabonese voters who expressed their democratic will in a process whose management lacked transparency,” the European Union’s Mariya Gabriel said, adding that the Gabon electoral commission had failed to provide the interested parties with essential information such as the electoral roll or list of polling stations.

Those remarks prompted Ali Bongo’s spokesman, Alain-Claude Nze, to accuse the elections observer mission of overstepping its mandate, complaining that “this mission was looking into things that had nothing to do with this election.”

Jean Ping spokesman Jean Gaspard Ntoutoume Ayi stated that “no one can dispute the fact that Jean Ping has roundly won this election”, despite the Constitutional Court announcement to the contrary.

“I greatly fear that another false step by the Constitutional Court will be the cause of deep and long-lasting instability in Gabon,” Ping had earlier told hundreds of Opposition supporters in Libreville.

With the country enduring uncertainty for nearly a month following the elections, concern had been growing that a ruling in favour of Bongo would have sparked a fresh wave of opposition protests.

Before the Constitutional Court had made its declaration confirming Ali Bongo as victor, along Libreville’s seafront, trucks carrying paratroopers and soldiers, their weapons at the ready, had patrolled on the main road that passes in front of both the Court and the presidential palace, supporting troops in riot gear who had been mobilized through the city, with long queues forming outside banks and cash machines, while the French Embassy in Libreville had advised French nationals in Gabon (around 10,000) to remain indoors until the situation had been resolved. 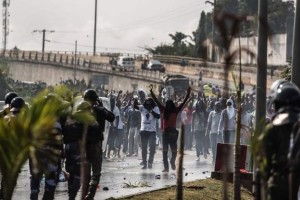 Ping had earlier warned that Gabon could face serious instability if the court rejected his appeal for a recount, but the government warned Ping that he would be held responsible if fresh violence had broken out, and that he could have been arrested if he crossed what authorities had declared as a “red line”. 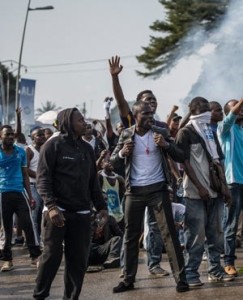 Following the announcement from the Court, Ping made it clear that he believes Bongo has the Court in his pocket, referring to it as “the Tower of Pisa that always leans the same way”.

In the immediate aftermath of the elections, Opposition supporters had erupted in protest after Bongo was declared the winner, and during the ensuing chaos, demonstrators set fire to the Parliament and clashed violently with police, who arrested around 1 000 people.

Opposition figures had claimed that “more than 50” people had been killed in the violence, but the government gave a figure of three dead.