To end the year, Boko Haram’s leader, Abubakar Shekau, urged his fighters to “kill, slaughter and abduct … and detonate bombs everywhere” in a new video that denies new Nigerian government claims that his Islamic extremist group has been crushed.

President Muhammadu Buhari declared on Christmas Eve that Nigerian soldiers had driven Boko Haram from its last forest enclave, with their fighters on the run and with no place to hide. But to repudiate that claim, Abubakar Shekau has announced that in reality he is “well and alive”.

Nigeria’s military said they seized Shekau’s Quran in an assault on Boko Haram’s last hideout in the northeastern Sambisa Forest, indicating, at least in their view, that Shekau is on the run.

The military has claimed at least three times in the past to have killed Shekau, only to have him reappear in a video, mocking the claims of his demise.

Boko Haram’s elusive leader appeared in a new video on 29th December to dispute the Nigerian Government’s claim that the jihadist group had been routed from its Sambisa Forest stronghold.

“We are safe. We have not been flushed out of anywhere. And tactics and strategies cannot reveal our location except if Allah wills by his decree,” Shekau said in the 25-minute video, flanked by masked armed fighters.

“You should not be telling lies to the people,” he said, referring to Nigerian President Muhammadu Buhari’s claim. “If you indeed crushed us, how can you see me like this? How many times have you killed us in your bogus death?” he asked. Shekau, who spoke in both Hausa and Arabic, said his video had been recorded on Christmas Day.

This was the first Shekau video since September, where he again disputed a claim by the Nigerian military that he had been wounded in battle. He vowed to continue fighting on until an Islamic state was imposed in northern Nigeria.

“The war is not over yet. There is still more,” he said, vowing no “respite” for Nigerians. He urged followers around the world to “fight and kill infidels. Our aim is to establish an Islamic Caliphate and we have our own Caliphate, we are not part of Nigeria.”

Boko Haram, which last year pledged allegiance to the Islamic State group, has reportedly been in the grip of a power struggle, after IS in Syria said, in August, that Shekau had been replaced as leader by Abu Musab al-Barnawi, the 22-year-old son of Boko Haram’s founder, Mohammed Yusuf. The most recent Shekau video appears to repudiate that claim, and Shekau seems to have a strong enough hold on his jihadist fighters for the time being, despite recent Nigerian Army offensives. 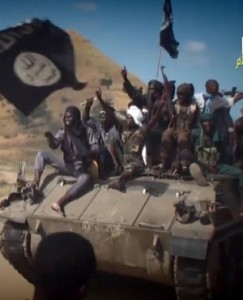 This newest Boko Haram video came after President Buhari announced that a months-long military campaign in the 1 300 square-kilometre Sambisa forest, in northeastern Borno state, had led to the “final crushing of Boko Haram terrorists in their last enclave”.

President Buhari congratulated his troops for “finally entering and crushing the remnants of the Boko Haram insurgents at ‘Camp Zero’, which is located deep within the heart of Sambisa Forest”.

“The terrorists are on the run, and no longer have a place to hide. I urge you to maintain the tempo by pursuing them and bringing them to justice,” he said.

That statement had made no mention of the whereabouts of Abubakar Shekau.

Earlier in December, two suicide bombers killed 30 people in northeastern Nigeria, but the governor of Borno state, the country’s jihadist heartland, also claimed, after that attack, that Boko Haram has been defeated. Governor Kashim Shettima said the war against the Islamist militants was “over” and further predicted that hundreds of thousands of displaced people will return to their homes by May 2017. “My objective is to close down all the camps by May 2017. Where people have shown the willingness to go back, we’ll support them to go back and rebuild their lives.”

Even though the UN said in late November that Boko Haram was blocking aid supplies from reaching refugees, leaving thousands of people at risk of starvation, Governor Shettima said the jihadists no longer posed a threat. “Two years ago, Maiduguri was on the edge of falling to the Boko Haram,” he said, referring to the state capital. “Boko Haram was controlling 20 out of 27 local government areas in Borno. You couldn’t dare to go 15 kilometres out of Maiduguri……you are in Boko Haram territory. But now Boko Haram have been defeated, they are being chased out of all our communities, they do not have the capacity to hold on to any territory in Nigeria any longer.”

The Governor did however acknowledge that Boko Haram still posed a threat to life. “Yes, they are launching suicide bombings and so on once in a while. But to me, even suicide bombing is a sign of weakness, not of strength. I believe the war is over.”

The United Nations has warned of an impending humanitarian disaster and charity Save the Children says 4.7 million people in the northeast need food assistance, warning that 400,000 children are in danger of starving.

But Governor Shettima said such figures were gross exaggerations. “Within the city of Maiduguri definitely resources are overstretched, especially with regards to water and sanitation, with regards to hospital facilities, with regards to even food security issues. We have huge humanitarian challenges but it’s also very difficult for you to convince me… that 100,000 people are dying,” he said.

With Boko Haram supposedly defeated in Governor Shettima’s opinion, he seems to believe that the impoverished northeast can prosper, despite its troubles. “The crisis has adversely affected the fortunes of our people. The unemployment situation is quite high… it can be as high as 35 percent or more. This is why our reconstruction and rehabilitation programme is quite active and we are employing local resources, local hands to reconstruct villages and communities destroyed by Boko Haram. We want to invest massively, aggressively, into agriculture.”

But despite the Governor’s positive view, there is no denying that the war has cost the lives of 20,000 people, leaving many children in the northeast orphaned, and the Governor at least acknowledged that such a situation could pose legacy problems further down the line. “We have about 49 000 orphans. If we fail to take care of these orphans, 15 years down the line… they will be the Frankenstein Monsters that will consume all of us.”

The government in Abuja and the Nigerian military have with good reason consistently and frequently claimed military victories against the jihadists, but access to the epicentre of the conflict is strictly controlled, making independent verification virtually impossible. Boko Haram attacks have meanwhile continued, casting doubt over claims that the insurgency has been defeated, despite undoubted progress in pushing back the group.

On the political front, Nigeria’s president Muhammadu Buhari in December proposed a multi-billion dollar jump in spending designed to lift the nation out of the “most challenging economic situation” in its history. He presented his NGN 7.3 trillion ($23bn) budget proposal for 2017, a 20% boost over spending in 2016, to “pull the economy out of recession as quickly as possible”.

Following the global crash in commodity prices through 2016 (and which are only recently on the road to a recovery of sorts), oil-dependent Nigeria is currently experiencing a serious economic crisis, with the International Monetary Fund predicting this year that the Nigerian economy will shrink by 1.7% in 2016, the country’s slowest growth in decades. West Africa’s biggest economy is being strangled by shortages of foreign exchange, ongoing militant activity in the oil-producing southern delta region, and regular electricity blackouts.

“We continue to face the most challenging economic situation in the history of our nation. Yet I remain convinced that this is also a time of great opportunity,” Buhari said, addressing the National Assembly in the capital Abuja.

The Nigerian government said it had earmarked N2.24 trillion (USD8 billion), which Buhari said represented around 30% of the total budget, for spending that will target power works, housing and transportation.

The 2017 budget is based on a crude oil price of $42.50 per barrel, with oil production estimated at 2.2 million barrels per day, and an average exchange rate of 305 naira to the dollar, despite calls from critics who say the currency should be devalued. “We are determined to get our production back to at least 2.2 million barrels per day,” Buhari said.

This may be easier said than done, because as a result of rebel attacks on oil infrastructure in the Niger Delta, oil production in Nigeria is now currently hovering around 1.9 million barrels per day. The crash in global oil prices, and rebel attacks disrupting oil production in the Delta which provides 70% of government revenue and the bulk of the country’s export earnings, have led to a dollar scarcity in Nigeria.

But Buhari refused to devalue the naira until June 2016, and he has continued to implement what many Nigerian economists consider to be unorthodox currency policies that have kept foreign investors away. The naira still is not being allowed to float freely, with a growing gap between the interbank market of around 315NGN/USD, and the more realistic black market rate of around 480NGN/$.

A series of setbacks hit the 2016 spending plan, with Nigeria’s budget ministry saying in October that it was then facing unanticipated revenue shortfalls, and that it had spent only a little more than half of what was allocated.

Financial analysts warn that the 2017 budget will likely face similar problems, with little indication that any major infrastructure projects are getting underway.