Indonesia’s Muslim community of more than 200 million people is overwhelmingly moderate but the country has grappled for the past15 years with a small but violent group of Islamist extremists.

Islamic State (IS) has spoken often about its objective of turning south-east Asia (specifically Malaysia and Indonesia) into provinces of its international caliphate.

Moderate Indonesian Muslims may be appalled at what is done in the name of their religion, but there is a small hard core element within Indonesian society who see jihad as a religious duty and who openly preach IS doctrine at mosques and madrassas (religious-based schools) throughout the country (but particularly in the main population hub of Java), even using their children as props to reinforce their message (as photographed openly, below) 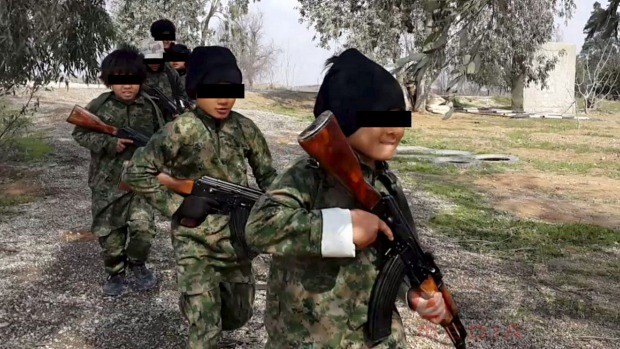 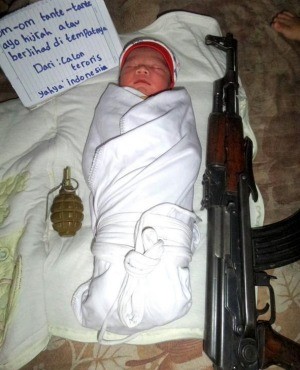 Experts on terrorism in the SE Asia region are generally united in assessing that the threat posed by sympathisers of Islamic State (IS) in Indonesia is rising, and that the Indonesian government at the political level has not responded well enough to the fundamentalist challenge.

While the exact numbers of Indonesians who have traveled to Syria to wage jihad is uncertain, it is estimated by Indonesia security services that certainly hundreds have made the journey to Turkey and onwards into Syria over the past 2 years, before the tightening of Indonesian immigration processes, enhanced intelligence and monitoring activities, and increasing counter-radicalisation efforts significantly reduced that flow.

As at December 2015, more than 200 Indonesians attempting to reach Syria had been intercepted in Turkey and deported back to Indonesia, reflecting an improved exchange of information between Turkish and Indonesian security authorities.

The concern now in Indonesia is that frustrated aspiring jihadis may turn their attention back to softer targets in Indonesia, rather than embarking on the hazardous and challenging journey to Syria, where the tide is slowly turning against IS and the irreversible loss of territory in Iraq and, to a lesser degree in Syria, is now a reality.

The most likely targets in Indonesia would be Western interests, assets and personnel. There is already a serious track record of the targeting of expatriates in Indonesia in the past

Indonesia is often seen as a tranquil, easy going and relaxed environment in which to work and live. In the main this accurately reflects the reality across the archipelago. However there is also a parallel world, of radicals willing to kill to achieve their objectives (clearly defined or otherwise). This has been a recurring theme across the country since 1998 when President Suharto reluctantly stood down from the Presidency, unleashing aspirations and expectations that have failed to materialize, creating discontent and anger.

This week, even Indonesia’s Security Minister Luhut Panjaitan warned that the broader SE Asia region was in danger of becoming “the new Somalia” with its al-Shabab-style Islamic militia, and its increasing regional piracy and kidnapping concerns. Perhaps in reality a little overstated but not necessarily entirely inaccurate.

OAMME maintains a regional office in Jakarta from which its founding Partner John Gartner and associates continue to provide updated intelligence briefs in order to assist clients with their “here and now” security concerns.