On Saturday 14 May Nigeria hosted talks on the continuing threat from Boko Haram with regional and Western powers in Abuja, as the UN continued to warn about the militants’ ties to the Islamic State group and its threat to African regional security.

Leaders from Benin, Cameroon, Chad and Niger were among the delegates attending, alongside French President Francois Hollande, and high-ranking diplomats from the US (Anthony Blinken, Deputy Secretary of State and the former Deputy National Security Advisor for President  Obama), Britain (Foreign Minister Philip Hammond) and the European Union. 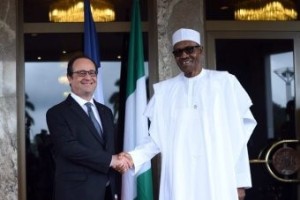 Deputy US Secretary of State Blinken stated his concern that Boko Haram militants have been deploying to Libya. “We have seen that Boko Haram’s ability to communicate has become more effective. They seem to have benefited from assistance from (IS)”

At the same time Blinken declined to comment on whether the US would agree to a recent Nigerian request to sell US warplanes, to assist in the battle against Boko Haram. He also said that Washington, which is flying surveillance drones over northeast Nigeria from a base in northern Cameroon, did not see Boko Haram as defeated.

But he conceded “they have been degraded” and said the US was “extremely vigilant” about the connections, amid reports of Boko Haram rebels fighting in Libya, and the group’s ties to al-Qaeda affiliates in the wider Sahel region (AQIM – Al Qaeda in the Islamic Maghreb). Boko Haram’s shadowy leader Abubakar Shekau pledged allegiance to his IS counterpart Abu Bakr al-Baghdadi in 2015, although there has since been little evidence so far of direct IS support on the ground in Nigeria.

The US envoy said that rather than working towards a time frame to end the insurgency, the summit focussed on addressing the underlying issues that had led to the evolution of Boko Haram in the first place. Blinken stressed the need for a more comprehensive approach in order to stabilise and rebuild communities liberated from Boko Haram, and the need to win the ideological as well as the military battle, to prevent the return of the insurgents. For balance, this included the need for an investigation into the multiple claims of human rights abuses by the Nigerian military

French President Hollande confirmed that France already provides Nigeria with intelligence, information, training and equipment, saying that “the results (of current military action against Boko Haram) are impressive” and that the rebels had been “diminished and forced to retreat”, before announcing that he and President Buhari had signed a Letter of Intent leading ultimately to a formal defence agreement

UK Foreign Secretary Hammond agreed that Boko Haram is being degraded but that post-conflict, the right conditions need to be built to bring stability to the region. To that end, Hammond pledged the sum of GBP40 million (just under USD60 million) and committed the UK MoD to the training of up to 1,000 Nigerian military personnel. A day earlier, in New York the UN Security Council said that the talks should help develop “a comprehensive strategy to address the governance, security, development, socio-economic and humanitarian dimensions of the crisis”.

Nigeria is seeking closer international military co-operation to bring to an end the nearly seven years of violence in the remote northeast, which has left at least 20 000 dead and displaced more than 2.6 million people. As a consequence, Boko Haram has become (in numbers killed) the deadliest terrorist group in the world, surpassing even the numbers killed by IS in the Middle East.

Only 2 days before the summit convened, a suicide bomber detonated his vest bomb outside a Government office complex in Maiduguri, in the north east of Nigeria, killing 7 people and injuring a further 18, while the previous day, worshippers in a mosque in the same city prevented another suicide bomber from entering the mosque, leading to an explosion outside that injured 4 people

President Hollande, after meeting with President Buhari in the Presidential villa in Abuja, stated that “we have to make sure (the internally displaced) can get back to their homes. Marginalization and corruption has allowed the Islamic extremists to flourish in northeast Nigeria”.

France and Nigeria recently signed an agreement on closer military co-operation, including intelligence sharing, and France is keen to help implement a regional solution to the insurgency.

Paris has traditionally concentrated on its former colonies surrounding Nigeria (Chad, Cameroon, and Niger) and sees itself as well-placed to help closer ties and longer-term economic development in the troubled region. 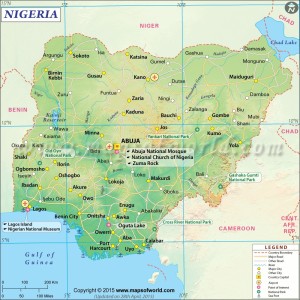 Former military ruler Buhari has vowed to defeat Boko Haram before the end of his first year in office later this month and the army has portrayed the Islamists as in disarray.

But there have been warnings against any premature declaration of victory.

Meanwhile across the border in Cameroon, multinational forces (Chadian and Cameroonian) fighting Boko Haram arrested five of the group’s leaders and freed dozens of captive women and children, Cameroon’s government announced on Saturday 14 May.

Boko Haram had set up camp in the forest after fleeing the continuing military operations in Nigeria and had been training captive young girls and women as suicide bombers, it was claimed.

President Buhari statement that “our main problem is the rehabilitation of infrastructure destroyed – educational, health, roads, bridges” seems to imply an understanding that Boko Haram cannot be defeated military until the problems that led to the creation of the now 7 year insurgency have been fully addressed.

Buhari stated his view that USD1 BILLION would be needed to help the development of the Lake Chad Basin (Nigeria, Cameroon, Chad and Niger) in order to eradicate the causes of the insurgency. Considering the recent claims that many billions of dollars have been corruptly siphoned from the Nigerian Treasury, Buhari will find it difficult to find such a sum of money, even from sympathetic international supporters

Many internally displaced refugees say they will not return home until it is safe. But there are doubts Nigeria’s military can secure the vast rural areas where Boko Haram continues to roam. The extremists have turned to using suicide bombers, often women and girls, to hit soft targets like mosques and marketplaces.

OAMME Principal John Gartner has operated extensively across north and north east Nigeria and has seen at first hand the lack of development and opportunity, further complicated by the immense wide spread poverty afflicting the region, where Government inattention and lack of investment has created disaffection and friction within and between communities.