UN Secretary General Ban Ki-moon has requested around 2,500 additional UN peacekeepers to reinforce the UN mission in Mali, which has seen 12 of its members killed in May alone, and 65 killed since the MUNISMA deployment commenced three years ago, raising concerns about its future in Mali. The Mali deployment is currently the deadliest active deployment for UN peacekeepers

This additional force would include a rapid reaction force, an aviation unit for aerial surveillance, specialists in convoy movement, additional military equipment and armour assets.

The Security Council is set to consider Ban’s request when it votes in New York on 29 June, on whether to extend the mission’s mandate in Mali. 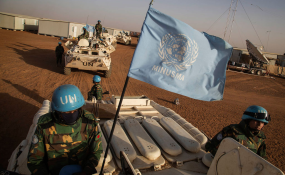 Recent extremist attacks in Mali have killed seven Guineans, five Chadians, five Togolese and one Chinese peacekeeper. The UN S-G has previously alluded to “persistent operational difficulties” faced by the force, and reiterated a call for the Malian government to step up security in the north of the country. Such a call in reality is forlorn, as the Mali Army is seriously lacking in effective operational capacity, has low morale, and is dependent on international military support

On Tuesday 31st May, a UN peacekeeper from China was killed, along with three civilians working for the UN’s Mali mission, in an attack on the UN mission’s camp in the city of Gao. This latest deadly attack has been claimed by Al-Qaeda in the Islamic Maghreb (AQIM) and is the first militant penetration into Gao since 2013, when French forces finally drove Islamic extremists from the region.

The MINUSMA camp was targeted in a mortar or rocket attack, according to a statement from the mission.

A second armed attack on a UN de-mining unit killed “two security guards and an international expert”, said the same statement said, without giving the nationality of the foreigner killed. According to an African military source in Mali, the civilian killed was French.

A Chinese foreign ministry spokesperson confirmed the dead peacekeeper was from China, and was killed in a “terrorist attack”.

“This is a grave and outrageous crime, China strongly condemns it, we call for the UN and Mali to carry out a thorough investigation and bring the perpetrators to justice,” the foreign ministry official told a press conference in Beijing on the 1st of June.

Al-Qaeda in the Islamic Maghreb (AQIM) meanwhile said that fighters from its “al-Murabitoun battalion engaged in a clash with ‘crusader occupation forces'”. The jihadists called it an “epic battle” and said they were “thrashing” the enemy.

Al-Murabitoun, led by one-eyed Algerian militant Mokhtar Belmokhtar, has claimed responsibility for several spectacular and bloody attacks in sub-Saharan Africa over the past few years.

Mali’s former colonial ruler France condemned the attack and said it was “at the side of the Malian authorities and MINUSMA in their efforts to fight terrorism and usher in stability in Mali.”

Five Togolese soldiers were also killed on May 29 in an ambush by unidentified gunmen in central Mali, 30 kilometres west of Sevare, and 10 days earlier, on 19 May, five Chadian soldiers died and three were wounded when their vehicle hit a landmine and thereafter came under fire by Islamist group Ansar Dine.

The attack on the Chadian soldiers occurred as they were escorting a convoy in the Kidal region. A Chadian military vehicle hit a landmine and then came under sustained gunfire, according to a statement on the UN Mali mission’s social media accounts

France’s Barkhane force, which has 3 500 soldiers deployed across five Sahel countries (Burkina Faso, Chad, Mali, Mauritania and Niger) announced immediately after the attack on the Chadian contingent that it had deployed logistical support following the ambush.

MINUSMA spokesman Colonel Gilles Jaron said the French army contingent had sent two helicopters and soldiers to secure the area. “This allowed the helicopters to pick up the wounded Chadians and evacuate them to Gao immediately”.

In February, in the same region of Kidal, an attack on the MINUSMA camp, also claimed by Ansar Dine, killed seven Guinean soldiers.

UN Spokesperson Stephane Dujarric said on Thursday  2nd June in New York “I think it’s clear to everyone that the security situation in parts of Mali have deteriorated…..UN staff have paid for it in blood”.

In a report to the Security Council, Ban stated that the overall security situation in Mali has deteriorated significantly over the past year, largely due to extremist groups enhancing their capabilities to attack public targets, not only in the north and east but reaching into the capital, Bamako.

Mali’s north has seen repeated violence since it fell under the control of Tuareg-led rebels who in 2012 allied with jihadist groups linked to Al-Qaeda.

The Islamists were displaced by a French-led military operation launched in January 2013, but they have since carried out sporadic attacks on security forces from their remote desert hideouts.

With daily summer temperatures now hitting 50°C in Mali, and sandstorms whipping up impossible conditions for road travel, UNISMA faces formidable challenges. The French contingent’s reliance on drones to monitor the area will prove to be more difficult when visibility is limited as a consequence of the seasonal sandstorms.